Cover Reveal and Excerpt from REDEMPTION!

Update: So I've got good news and bad news (but really, the bad news isn't that bad).

The good news: I've added another sixteen pages of material since sending Redemption to my beta readers, and now it feels just right. (Hmm... I sound like Goldilocks there.)

The bad news? I've delayed the release about a week so that the book can get another round of proofreading. So, instead of being on your ereader for Christmas, it'll be a lovely post-Christmas gift. I'm anticipating it'll come out somewhere around 12/29, give or take a day or two.

Many thanks to those of you who've told me you're excited about the book. So am I! I always get nervous when I release a book, and I'm hoping you all love Antonio and Bianca's story as much as I do.

I'm headed back into the writing cave to get this baby all polished up and ready to go!!!

I'm very excited to announce that Redemption (Blood and Honor, #3) will be released very soon--somewhere around December 29th, give or take a few days. Readers have been emailing me for the last few weeks asking when the next one is coming, and it's great to know that so many folks are excited for it.

Want to see the gorgeous cover? 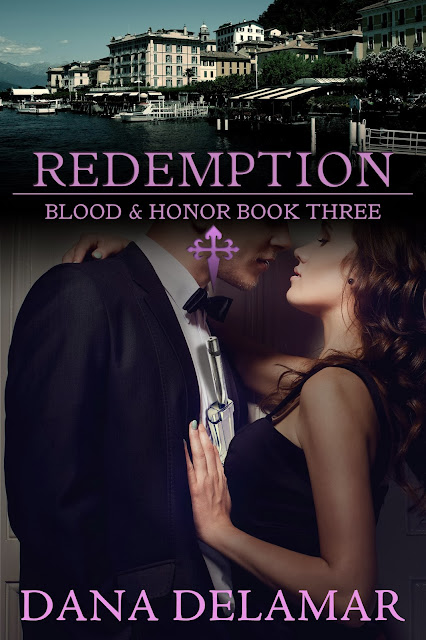 Many, many thanks to Scarlett Rugers for her awesome design!!!

A mobster seeking redemption. A woman on a mission.
A powerful enemy ready to pounce…

Antonio Legato has always been an outsider, even though he's moved up in the Lucchesi mob organization. When he falls in love with Bianca Lucchesi, Antonio may at last become part of the family, but he’s hiding an ugly secret about her father’s death. Telling Bianca the truth will pit blood against blood and annihilate the family he loves.

Bianca Lucchesi is on a mission to help her brothers ruin Antonio so they can take their rightful place in the organization. As assistant to the don’s wife, Bianca seduces Antonio while pursuing her brothers’ revenge. But her loyalty is divided—she and Antonio share a secret that he’s unaware of. She longs to tell him, but fears he can never forgive what she’s done.


When Bianca and Antonio learn that her brothers have rashly allied with a cunning enemy who is plotting against the Lucchesis, can they heal the family’s wounds before everyone they love is destroyed?

Her heart pounding, Bianca Lucchesi smiled at the man she’d come to see while doing her best to ignore the one she’d never wanted to see again. Antonio Legato. She’d arranged to meet her uncle at the bank instead of at his home because she’d hoped to avoid Antonio. And here he was anyway.

Dio mio, would her heart never slow down? One glimpse of him had been enough to bring everything back. Everything she’d tried so damn hard to suppress. To forget.

She took a breath and widened her smile. “Zio Enrico,” she said as he came around the desk and embraced her, kissing her on both cheeks. Marriage had agreed with her godfather. He was still lean, still handsome as sin, with that black hair and those chocolate eyes. He looked happy again—not stricken, the way he’d looked at the funerals for her father and her brother Fedele.

“Prego,” he said, motioning to the chair beside Antonio. “I don’t believe you’ve met my capo di società, Antonio Legato.”

Would Antonio say something about their past? She stuck out her hand and tried to look mildly interested. Anything but infuriated. Or hurt. “Signore,” she said.

Antonio rose and took her hand in his large one. Cristo, he’d grown. He was a man now—at least six feet, with the broad shoulders and slim hips of a man in his prime.

His blue eyes met hers, a shock of unruly blond hair falling just over them. Though he looked a little pale, a wave of heat rolled through her. How many nights had she dreamed of him unbidden? How many times had she relived those moments they’d spent together?

He flashed her a casual smile, as if he were utterly unaffected by her, and pressed a kiss to her knuckles, the light brush of his lips reminding her of other places he’d kissed.

“Signorina Lucchesi. It’s a pleasure. I haven’t seen you since secondary school.”

“I wasn’t aware you knew each other,” Enrico said.

“We had a class together,” Antonio said. “Chemistry, I believe.”

Bianca wanted to kick him in the shin. Was he trying to flirt with her? Chemistry! Yes, they’d had it. But outside of class.

“You’re mistaken, signore. It was biology, not chemistry.”

“My error.” He was still grinning at her—the arrogant bastard. Did he think she still wanted him? Well if he did, he was all wrong.

Antonio let go of her hand, and they retook their seats. Bianca’s skin tingled where his lips and fingers had touched her, and she resisted the urge to press her hand to her mouth, to feel that tingling against her lips. Damn him. Antonio Legato was a hundred different kinds of infuriating.

And he knew it.

Want to know when it comes out?

Join my mailing list
(I send it only a handful of times a year, so it won't clog your inbox)